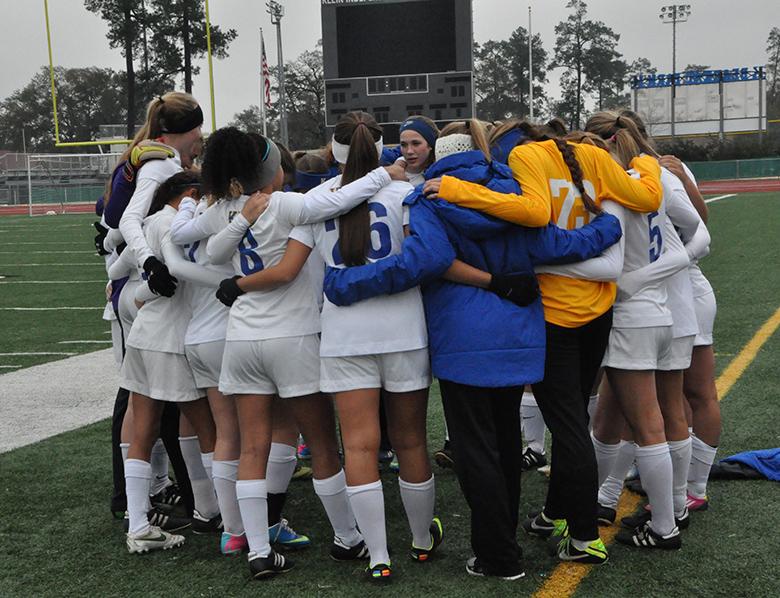 Varsity girls gather in a huddle during the March 4 game against Dekaney.

After placing 2nd in districts with a 13-1-2 record, the Lady Bearkat Varsity soccer season ended earlier than expected. A loss in the bi-district round of playoffs to A&M Consolidated on March 27 removed the team from the playoff bracket, subsequently ending the Lady Bearkats playoff run.

“Obviously, we had a very good record this year, and making it far into the playoffs was something we were really confident in ourselves with. We had a good game; it’s not like we played bad. We can’t blame ourselves for that,” said junior forward Adrienne Harrison. “We tied and couldn’t seem to get another goal in the back of the net with the many chances we had.”

Rather than losing in regulation, the girls played in overtime for two halves and tied. Penalty kicks then took place; after tying in five shots, three extra players from each team took a shot for sudden death. The Lady Bearkats missed the last shot, giving A&M Consolidated the win.

“I do not believe penalty kicks are a proper way to end any soccer game. For instance, we were clearly the better team, and the game was given to them over eight kicks straight to the keeper,” said Harrison. “It was sadly and surprisingly the end of our season.”

Penalty kicks may have tampered the Lady Bearkats’ desired result of winning, but that’s not to say that it reflected the team’s efforts overall.

“Naturally, I was/am severely disappointed in the result. I wasn’t disappointed in the girls or the way we played but strongly believe we deserved a better result,” said head coach Adrian Ramirez. “We played very well and got everything we wanted in the game. We just had a hard time finding the back of the net. We had countless opportunities, but sometimes you have games where it seems like no matter what you do, it’s just not going your way.”

The Varsity Lady Bearkats also faced a changing season with a new head coach in Ramirez and the departure of several seniors.

“I was very excited about the opportunity to be the head coach this year. I knew there would be a transition, but luckily I learned a great deal from the previous coach that made the transition easier,” said Ramirez. “I think this year’s team was more balanced and had more depth from last year’s team. This allowed us to be more flexible and to play in various styles. I’m very eager to get back to work for next season, and I know the girls are going to be hungrier than ever, especially with the way our season ended.”

Although smoldering the fire of this season, the playoff loss fueled the desire to achieve the goal for next year.

“This year’s upset will definitely motivate us more,” said Harrison. “I feel we will also be a very strong team in our district because of our talent and relationships with each other as a team; we all worked together to have a stronger bond and create more friendships to make a more successful season. As a team, our overall goal was to make it to state which I believe was definitely possible, but that day the odds just didn’t work in our favor. Next year, that goal will be achieved.”