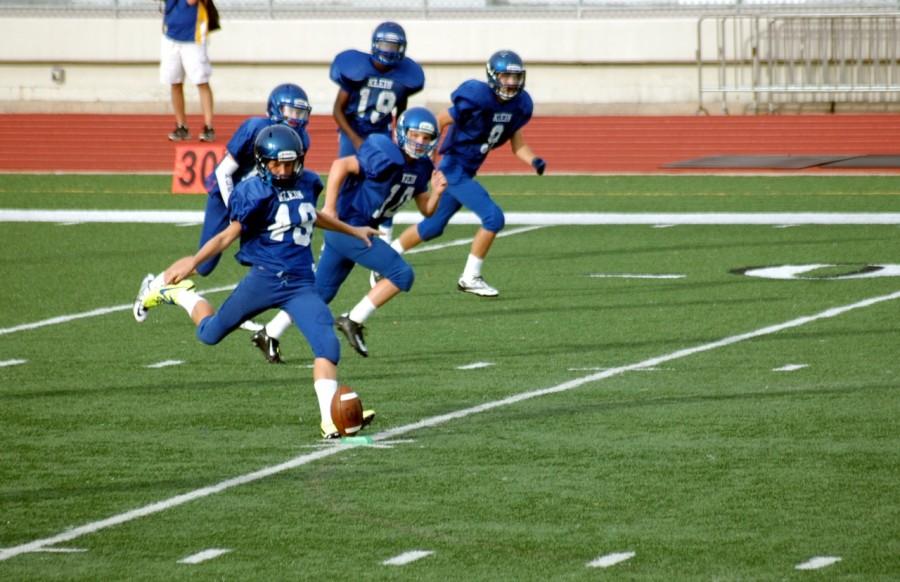 Wolff prepares to initiate the kickoff in the freshman A team game against Westside.

The 2014 football season came to an end on November 7 with games against the Westfield Mustangs. Although the Varsity season closed with a disappointing 2-8 record overall, the Thursday night stadium lights shone brightly upon the freshman A team.

In addition to the team boasting a 8-1-1 record, freshman kicker and punter Trey Wolff concluded the season with 36 points for the team, excelling in field goals and extra points and having not missed a single kick

“I like the feeling of pride for when you’re playing, when you make a good play, how you feel,” said Trey. “This was definitely one of my best seasons because the team is really bonding together this year. I feel like the team supports me better due to my improvements as well as their understanding of what it takes to do my job.”

Trey first started to play football as a 7th grader in middle school, although he originally didn’t serve as a kicker or a punter.

“I started off playing quarterback, but when I saw the skill we had in our quarterback, Greyson Lembcke, I realized the team needed help in another area,” said Trey.

Since then, he’s been training to improve his kicking skills both in and outside of school. Becoming a member of the freshman team has given Trey something more than just on-field experience: it has confirmed for him that good conduct, academic performance, and diligence matter.

“Football’s given me something to focus on,” said Trey. “It helps me get better grades in school; the focus I use to get better in football is the same focus I use in school. Usually before the game, the team is getting their mind set for the game.”

Any sport comes with its own challenges. These include injury, high expectations, and personal disappointments.  Trey manages to balance the rigors of the sport by keeping a positive mental attitude.

“There’s been a lot of times where I sprain my ankle before a game and I think I’m going to be out or not do well, but all of a sudden, it’s better the next day. Some days I do really well, some days I can’t do anything,” said Trey. “I’ve learned that everything happens for a reason.”

“My parents always tell me how they’re proud and how they’re happy that I’m playing the position of kicker. Sometimes other players frown upon my position,” said Trey. “While all of the other players are running out there hitting people and getting hit, and I just stand there and kick a ball. They don’t think that kickers do anything, but it’s one of the most important positions.”

Along with the triumphs and hardships, the opportunity to be play and perform well in his freshman season brings Trey one step closer to achieving his ultimate goal.

“I want to be successfully playing on the varsity team and see if I can get a college scholarship,” said Trey. “Ever since 8th grade, I’ve been wanting to do that. I’ve had the same plan, and I’m going to keep it that way.”