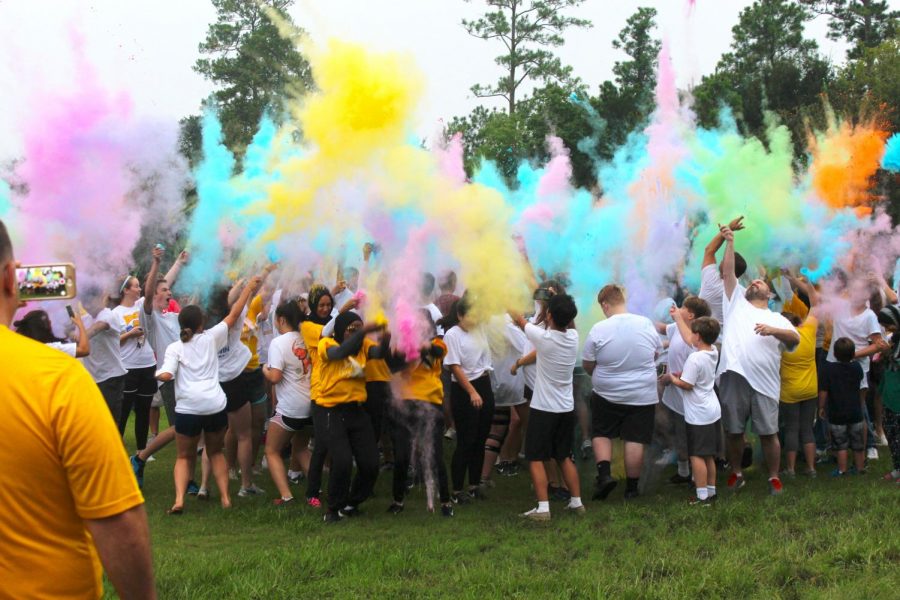 Everyone that is participating gathers to begin the color run by throwing the color in the air.

HOSA began preparing the idea of the Color Run early on in the school year.

“We thought about it sometime in the beginning of the year and we wanted to have the color run because September is Childhood Cancer Awareness month,” senior and HOSA President Andy DeGuzman said.

In the past, the school and a big portion of the district has helped and recognized Klein Cain junior Jacob Munoz’s journey with the #JacobStrong movement. So this year’s color run was dedicated to Claudia’s celebration of being three years cancer free, DeGuzman said.

“We figured Claudia didn’t really get that much attention with it whereas Jacob from Klein Cain and we wanted to give her that recognition especially since it’s her senior year and she’s three years cancer free,” DeGuzman said.

Although, HOSA collectively came up with the idea of having the color run, it would not have been able to be successful without those who care who were also behind the organizing of the color run.

“To see the joy that was on the face of Claudia and her family that day, it made every minute of work worth it,” HOSA sponsor Kristen Haggard said. “As a registered nurse, I have seen children have to go through dealing with the diagnosis and struggles of cancer. And as a mom, I cannot even imagine how hard this has been on her mom and family. To see Claudia doing so well now, it is just the happiest of all scenarios for her and to be able to donate money to hopefully find better treatment methods and even a cure for cancer, I would honestly be willing to host a color run every single weekend if I knew it would help.”

Lori Favela, Claudia’s mom and English 1 teacher was also very proud of the school and community for organizing and participating in such a great big act of kindness for Claudia.

“To be at the color run, to see so many people, her friends of course, but also so many people in the community of Klein coming out to support her was an incredible feeling,” Lori said. “I feel very grateful to be a part of Klein because of that.”

Being told that the color run was in honor of Claudia brought her to tears for good reason.

“I bursted out crying immediately,” Claudia said. “I started crying immediately because it was a celebration for me being three years cancer free and having me being to the point of me being healthy enough to help other people was very special to me so I felt extremely honored and blessed to have such a great organization behind me doing it for me and it was just awesome.”

Although some people are fine having all the attention on them, Claudia does not usually like throwing out the fact that she has beat cancer to everyone, but she did appreciate that HOSA did such an amazing thing by organizing the color run so that the donations could go to Texas Children’s Hospital.

“Well I normally wouldn’t like my name on something like that because I just don’t really like to push my illness in peoples faces but I feel like this was awesome because the proceeds went to Texas Children’s so they were using my name and I don’t feel like it was too much,” Claudia said.  “It was just to bring people out and if my name was being used to bring more people out to benefit children with cancer, then I was okay with it.”

Other than just surprising Claudia, the dedication of the color run in Claudia’s name was a surprise for her mom as well.

“It was a surprise,” Lori said. “She already had the flyer made. And it was all set, and it was a big surprise and a big shock because Claudia’s been off of treatment for three years I kind of thought it was just off of everyone’s mind.”

“It actually allowed us more time to plan and to sell even more tickets,” Haggard said. “The rain was one thing that caused us a little bit of stress, but in the end, someone (Claudia’s angel) was looking out for us and the minute we took the huge group picture at the end, the rain came down.  We got wet cleaning up and had to protect the DJ’s equipment, but we were so thankful we were able to raise so much money.”

Other than Claudia, there are a lot of other children that get diagnosed with cancer and fight their battle everyday, but everyone is capable of helping and also learning something from them although, some people may not realize it.

“Childhood cancer awareness month is in September, but children are diagnosed with cancer every day and sometimes the outcome is not as positive as Claudia’s,”Haggard said. “Claudia had to make a tough decision to have her leg amputated and none of us can imagine the hardships that she faces on a daily basis but yet she does so with a smile on her face and with an attitude of perseverance. She is an example we should all look up to.”

Haggard also had some facts she shared about childhood cancer that some people may not be aware of.

“Only 4 percent of US Federal funding is solely dedicated to childhood cancer,” Haggard said. “This is a number that is unacceptable. 43 children every day are diagnosed with cancer. Cancer is the number one cause of death by disease among children.  For Claudia, this color run was much more than just a fun event, it was about her friends she made while she was being treated who are no longer here.”