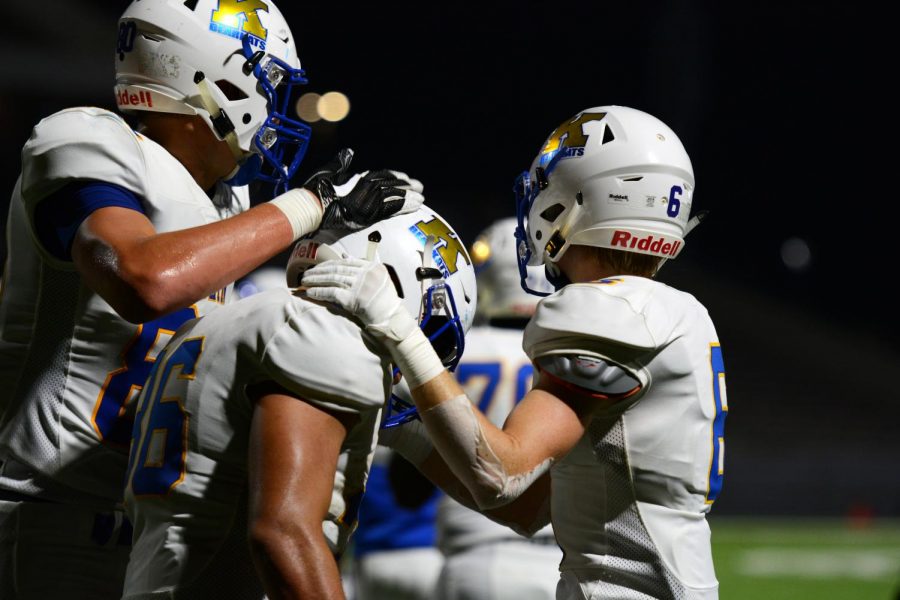 The Bearkat’s season opener against Cy-Creek was met with much uncertainty as a thunderstorm skirted the area of Pridgeon stadium, causing a delay that lasted more than an hour and a half.

“I thought it was going to be canceled,” senior and mascot Allyson Harris said. “We were all very unsure of what would happen.”

While the delay seemed to worry many students and parents, the team themselves made sure that, despite their situation, they stayed focus on the game and the task at hand.

“We were all pretty focused,” quaterback Bryce Corriston said. “We knew that the lightning was gonna away and we were going to be able to play. So we had to keep everyone locked in and focused.”

As the storms began to clear and the stands filled with excited fans, the Bearkats tried to focus on carrying the same intensity they’d had in the locker room onto the field.

“The warmup was shortened, but we were all so ready to go that all we needed was that quick warm up, and we were ready to get out there,” Corriston said.

The first quarter seemed to be a bit of a rough start for the Bearkats. After a missed PAT, they trailed the Cougars 14-13. The start of the game did not seem to affect them through the next three quarters though, as they continued to keep the pressure on Cy-Creek, an finished with a decisive 54-30 win.

“I think the (offensive) line did an awesome job opening holes up for our running backs,” Corriston said. “Our defense also got some turnovers; I think that was huge”

Running back Kenzo Viteri agreed that the line was a crucial part of the win.

“The line (has) great guys down there and they don’t get enough love,” he said. “Even further beyond the line is the coaches. Coach Golden and coach Morton are doing amazing things with that line, making sure they’re prepared for the game”

While the game was an overall success, the team is still focusing on what they can improve on for their next game against Tomball Memorial on September 5.

The Bearkats suffered a defeat of 47-21 in their game against Tomball Memorial. Story: