Klein ISD Choirs Join Together to Perform for Community 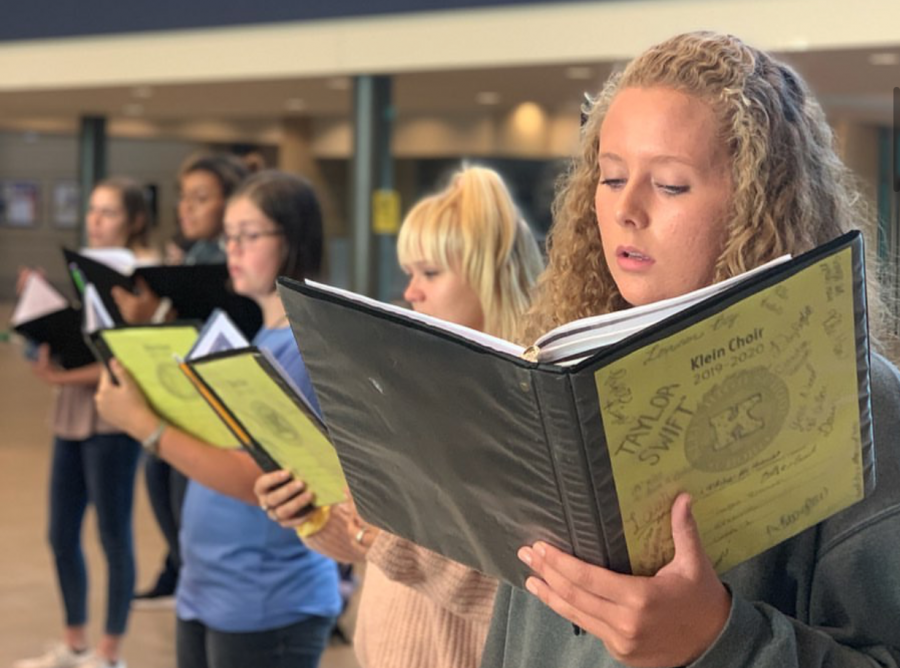 Senior Taylor Brown rehearses her music at a FACE rehearsal.

The auditorium of Klein Cain High School was filled with song on October 5, where the varsity choirs of Klein ISD joined together to perform a series of music affiliated with the annual “World of Song” Concert.

Created by the non-profit Foundation for the Arts & Community Enrichment (FACE), the goal of the “World of Song” concert is to provide the community and its performers with educational opportunities and enrichment of cultural arts programming.

“This was a learning experience because it showed how impactful music can be outside of the choir room,” senior Klein Choir President Tre LeMalle said. “It has no language or ethnic boundaries.”

The pieces performed in “World of Song” were diverse from one another, dating from different historical time periods and originating from various areas of the world.

“Each one of our pieces included a different culture along with different aspects of life,” senior Macie McLane said. “We had a German piece discussing a love story, a song from Mexico basically describing a party, and a religious American piece as well.”

Klein Choir received all five of the pieces in early September, using their regular class period and a series of evening rehearsals to learn and prepare the music within the span of a month.

“It was hard music, learning it was difficult,” senior Chantel James said. “But at the end of the day we got to look at our hard work and just sit back and enjoy it.”

The conjoined choirs were conducted by Dr. Eugene Rogers, a two-time Emmy Award winner and associate professor of conducting at the University of Michigan.

“Our rehearsals were so much fun, I absolutely loved working with Dr. Rogers,” McLane said. “He was very engaging and really motivated us to perform to the best of our ability.

Having toured all around the world with his choirs, Rogers’ assisted FACE’s purpose by using his experience with different cultures to educate the young musicians of the Klein district.

“In our world right now, there is such turmoil,” Rogers said. “My goal is to spread the general idea of Nelson Mandela’s philosophy ‘Ubuntu’, which basically says ‘We are more human through the humanity of others.’”

The purpose of the “World of Song” concert remains important to Klein ISD and its choirs, furthering the education of both the students and members of the community.

“Hopefully by having a bit of an understanding of someone else’s culture and experience, the world can grow to have a little more respect for others,” Rogers said “My hope is that society can get a taste of other cultures and become more sensitive global citizens through the arts.”