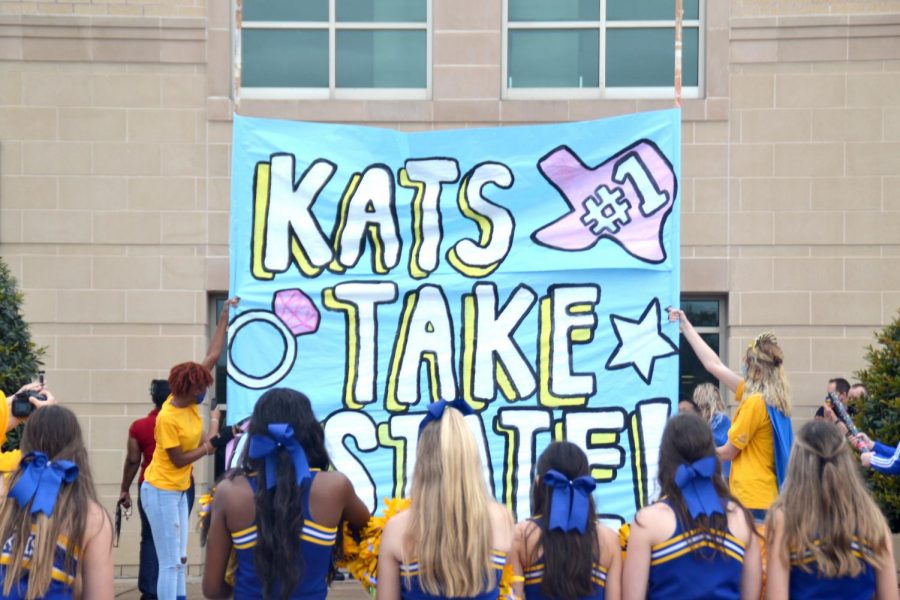 Several organizations give the volleyball a send off as they head to the state championship game in Garland on Dec. 11

The Varsity Volleyball team claimed  the silver medal Saturday after they were defeated by crosstown rival Seven Lakes High School at the UIL State Championship game, capping off an historic season, where they were undefeated entering the game.

Thrilled to represent Klein at the state finals, the girls were given an energetic, Bearkat style send-off Friday morning as they headed to Garland, Texas.

“At first, the loss was tough on everyone because we’ve had such a good season,” senior hitter Abby Sweeney said. “After a bit of time, the team and I realized that we made history and our season as a whole has been successful despite the pandemic.”

As they prepared for their final showdown, the volleyball team had to sacrifice a lot due to COVID-related restrictions, like not being able to ride in a school bus together until their very last game.

“A lot of safety precautions kind of went into play,” said  Head Coach Kate Zora. “Our ability to have team dinners, sleepovers, and social events-that all changed. I felt like I had to take all the fun out of the season.”

Despite these loss, the girls were still committed to their craft, practicing harder than ever. For many of these teenagers, especially Sweeney, volleyball has served as an escape from the everyday challenges of modern high-school life.

“Volleyball has become a really big outlet for me,”  Sweeney said. “If I do badly on a test on a certain day, I can just go to volleyball and improve there, and the day becomes better. It’s like a whole other world when you step into the gym.”

And in that gym, despite all the chaos happening outside,  Zora and the team were able to tune out the outside world and focus on one thing – volleyball.

“We set our expectations pretty high when the season started because we knew we had a lot of kids returning from our regional final team,” said Zora. “We were pretty excited about that and we knew we could build on that success since no one had really graduated, and the goal was to improve.”

And with a record breaking season for the Bearkat history books, the Klein Volleyball team accomplished their goal and so much more along the way. This definitely won’t be a season Coach Zora will forget anytime soon.

“The girls worked extremely hard,” Zora said. “They set their goals really really high and I’m super proud of them.”